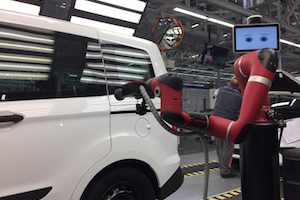 Once renowned for its pristine beaches, soaring temperatures and enthusiastic hospitality, Turkey was a hot spot for tourists across the world looking to get away for a week or two. But as conflict in neighbouring Syria erupted in 2011, the number of holidaymakers visiting the country plummeted. Change is now in the air. In total, tourism increased by 31.3% during the first quarter of 2018, according to figures from the Turkish Statistical Institute (TurkStat). The latest forecast from the UK’s Ambassador to Turkey Dominick Chilcott suggests that around three million British tourists alone are expected to travel to the country in 2018.

Nowhere is this change more apparent than in bustling Istanbul. The roads leading to and from the city’s airport (Istanbul is not the capital of Turkey - a common mistake) are jam packed, and the main tourist attractions have lengthy queues every day of the week. Ford Otosan’s research and development centre is located in Istanbul, but its headquarters is located two hours south-east past a sea of factories that are churning out a huge variety of goods.

Nestled in a quiet, leafy corner sits the company’s Gölcük and Yeniköy plants. These have annual capacities of 315,000 and 110,000 units respectively. They are separated only by a small river that is maintained by the OEM and runs into the Sea of Marmara. From here, the Transit, Custom and Courier light commercial vehicles (LCVs) are made and shipped all over the world. Although they are situated in a small and rather dated-looking town, both plants are surprisingly modern and well equipped. The Yeniköy plant opened in 2014, making it the first automotive plant established in Turkey in 13 years. In contrast, Gölcük opened in 2001, but it has since benefitted from several large investments.

During my visit I spoke to Cem Temel, assistant general manager for the Kocaeli plants (Gölcük and Yeniköy) and new projects at Ford Otosan. He was keen to emphasise his focus on “future-looking projects,” which currently take up roughly 75% of his time. These include anything from the adoption of more robots to the smart use of data for predictive maintenance and the connectivity of different systems across the manufacturing process.

But not all of Ford Otosan’s facilities in Turkey are as high tech as these two plants. The company also makes heavy-commercial vehicles (HCVs), but this takes place another two and a half hours south-east of Gölcük and Yeniköy outside a small town called İnönü. Interestingly, the company also makes various four- and six-cylinder engines for LCVs and HCVs at this plant.

The level of automation here is much lower than at the two LCV plants. However, İnönü plant manager Aysan Hosver explained that they are “working on investing in digital manufacturing strategies” in order to optimise efficiency. He also outlined his plan to make more components in-house, such as a new rear axle for the Transit in 2019 and a new transmission in 2020.

Both Temel and Hosver have high hopes for the future both in terms of investment and demand. The latter is justified by recent figures from the Turkish Automotive Manufacturers Association (OSD), which show that total vehicle production across the country rose by 18% in 2017 when compared to 2016, reaching 1.1m units. Car exports were up by 41%, with domestic sales also growing by 13%. Although President Erdoğan is reportedly eager to support the rise of a local vehicle manufacturer, these figures should be music to his ears, providing they continue to climb.

For more on Turkey's automotive industry, read the upcoming May-June issue of AMS.