Packing in the power

As JLR ramps up its electrification efforts, Mike Farish visits a pilot production line for battery packs, developed together with WMG at the University of Warwick 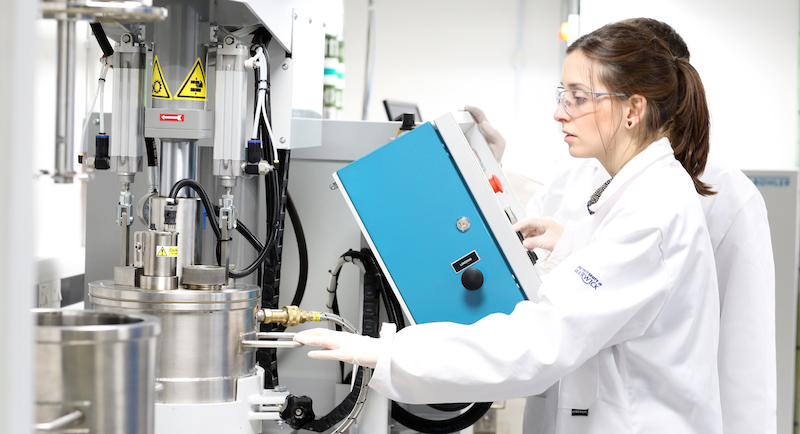 The difference between round and square is not just a matter of abstract geometry; it has real implications for the construction of effective battery packs that could power the electric vehicles (EVs) of the future. The most basic components of such packs are the individual batteries or cells, which are massed together to form a collective power source for the vehicle. A fundamental aim when doing so is to ensure the highest density of ‘active material’.

Cells with a square cross-section look the best bet, because of the ease with which they can be butted up against each other with minimal inactive space. But because of the way they are constructed, internally cylindrical cells have a higher individual energy density and so may actually be the better option. That is according to Professor Robert Harrison, head of automation systems at Warwick Manufacturing Group (WMG), which is part of the University of Warwick.

This observation formed the starting point for a two-year development project led by WMG. Costing £13m ($18m), the aim was to develop assembly processes for EV battery packs that would effectively exploit modern manufacturing techniques, with the hope of ensuring procedural efficiency and consistent product quality, as well as maximising the crucial benchmark of active material density.

The project was called Automated Module-to-Pack Pilot Production Line for Industrial Innovation, or AMPLiFII. With the first stage ending in October 2017, it involved a consortium of automotive-related companies and technology suppliers, with the former including premium car manufacturer Jaguar Land Rover (JLR) as well as truck-maker Alexander Dennis. Its most tangible consequence is a complete pilot production line at WMG which is now available as a resource for companies that want to familiarise themselves with such technologies and procedures.

However, as Harrison explained to AMS during a site visit, “integration of product and process” was fundamental to the whole project, and so a decision had to made at the very start as to which cells to use – round or square. The former was chosen, specifically cells 18mm in diameter by 65mm in height, in part because of their greater density of active material. Also, these cells are already used in existing EV battery packs, and are therefore widely available from multiple suppliers.

A three-layer compositionThe cells form the basis of a three-layered hierarchy of basic elements in the battery pack systems: the cells themselves, the ‘module’ collections of cells packed together in their own framework, and then ‘packs’ comprising several modules controlled by a single battery management system that form the complete power source for a vehicle.

The second of those stages – the modules – represents the most innovative aspect of that hierarchy. The cells are packed into rectangular frameworks which in themselves look unexceptional. But at the positive and negative ends of the cells sit copper busbar sections, which are pulsed arc welded to the cells to establish the electrical connections to allow current to flow from the cells and then to the motor.

According to Harrison, the configuration has a number of clever characteristics. For example, the orientation of adjacent groups of cells can be inverted through 180 degrees to allow for different combinations of serial or parallel power delivery without any alteration to the manufacturing process. This means that the modules can be configured to be ‘high power’ or ‘high energy’ as appropriate – the first being an off-road application, whereby heavy loads are moved over short distances, and the second being a car or bus whereby extended range with relatively light loads would be typical.

A crucial enabling factor is that the busbars can be welded just as easily to either end of the cells, even though each of the positive and negative terminals has a slightly different geometry, so achieving a degree of product variability presents no major manufacturing problems. In short, “flexibility and configurability” are key performance parameters that Harrison and his team aimed to achieve in the product concept.

Enabling efficient productionThose performance goals also required a production process that could deliver high levels of product quality, reliability and efficiency. The manufacturing installation at Warwick demonstrates how such a process might be implemented by using a format that allows for a ramp-up in volumes. It comprises several manual assembly stations to supplement a number of fully automated procedures, all of which are linked together by a conveyor. But the underlying principle, Harrison noted, is to ensure there are no faults.

For this reason, the very first station in the line is critical since it carries out a fully automated inspection routine to ensure that every single cell is in full working order before it enters the assembly process. Batches of cells are loaded into specially designed plastic ‘nests’, which are then placed into the cabinet of the station so that “every individual cell is tested for polarity, voltage and internal resistance”, noted Harrison. From that point on, every cell possesses a unique identification mark from their own manufacturer which are retained throughout all subsequent operations. The key here, as Harrison explained, is the fact that “the birth history of the system is recorded”.

The same principle of quality through traceability is also applied at the pulsed arc welding station which, like the initial inspection station, is fully automated so that “each weld is logged.” The supporting IT infrastructure is therefore an implementation of the Industry 4.0 concept, with the installation “configured around a Profinet network with a gateway to Cloud analytics.” As such, the whole set-up can be easily reconfigured to meet new demands. This is facilitated by the highly modular nature of the system, in which controls are located at each workstation rather than being accessed remotely.

Paul Haney, manager for advanced battery research at JLR, has confirmed that the project is likely to have a tangible impact on the way that carmakers produce EVs. He is part of a small JLR team permanently present at the Warwick site. At the moment, the OEM’s only electrified vehicle in its portfolio is a hybrid Range Rover, in which all systems and components supporting electric propulsion are outsourced.

The Jaguar I-PACE electric SUV is also set to go on sale in 2018. But looking beyond that, Haney referred to JLR’s commitment to electrify every new model from 2020. “We will need to study vertical integration and decide where it will make sense for us,” he stated. “As the cost of a battery pack can represent half the cost of the vehicle, then ultimately it is not something you are going to want to buy-in.” Hence JLR’s participation in the AMPLiFII project, in which it hoped to “come to understand how we could make our own modules”.

Design comes before manufacturing, and as Haney was keen to emphasise, JLR was involved in design specification right from the start. The reason for this, he explained, is that that EV battery systems are “not a one-size-fits-all type of technology.” Instead, they must be configured very closely to the specific requirements of particular carmakers. Therefore, for the project to be beneficial to JLR, Haney had to ensure that the modules could be suitable for use in real vehicles in the near future.

However, a number of issues immediately came to the fore. Firstly, the number of 18x65mm cells required to create a practicable electric propulsion system for a vehicle was around 8,900. This would provide the necessary power to make a vehicle commercially viable, and would mean that 17,800 welds would be needed in order to connect the positive and negative ends of each cell to the overall system. Furthermore, in cells used across various consumer electronic devices, the relatively low current conditions they require mean that the connections can be made of nickel or steel, for which conventional resistance welding is sufficient. The very high current demands of EVs mean that a much more electrically conductive busbar material is required.

Poised for vertical integrationAs Haney further explained, the choice of welding technology was also influenced by the in-use cooling technique that JLR wanted to utilise. The team developed two module variants: one in which cooling is effected by narrow tubes carrying a coolant liquid, in this case a water-glycol mixture interleaved with the cells themselves, and another in which an aluminium cooling plate with integral coolant channels is bonded to one or other set of busbars. The latter, he confirmed, is the configuration that JLR decided best suited its requirements because it helps to “optimise energy density”.

The high-energy module configuration is also larger than its high-power counterpart and uses aluminium rather than plastic for its outer structural packaging. Haney suggested that JLR needed to develop units that would be robust enough to withstand many years of service.

Though pulsed arc welding has served JLR’s purposes in helping to construct prototype modules, Haney conceded that it will not be appropriate for commercial production. As a contact technique that requires one second per weld, it is too slow given the number of welds involved; a battery pack for a single vehicle would take “over five hours” to weld, according to Haney. Therefore, an objective for future development will be to prove out a much faster approach, which would almost certainly involve the use of lasers, Haney revealed.

That said, he believes that the project has achieved its initial goals, proving that it is possible to utilise cylindrical cells in a highly compact way that combines the required energy density with acceptable cooling performance. “It is a capable design,” Haney confirmed. Moreover, it is a design that JLR now owns and can develop as it sees fit.

Future work will address both the development of further automation in the assembly process and the enhancement of the product concept to reduce weight and improve overall efficiency. Haney is also confident that the project has brought JLR closer to establishing in-house battery pack assembly operations if it wishes to do so: “If we decide to go for vertical integration, then we are much further down that route than when we started.”

The battery modules can be configured for ‘high power’ or ‘high energy’ modes, the first being for off-road applications and the second for cars and buses