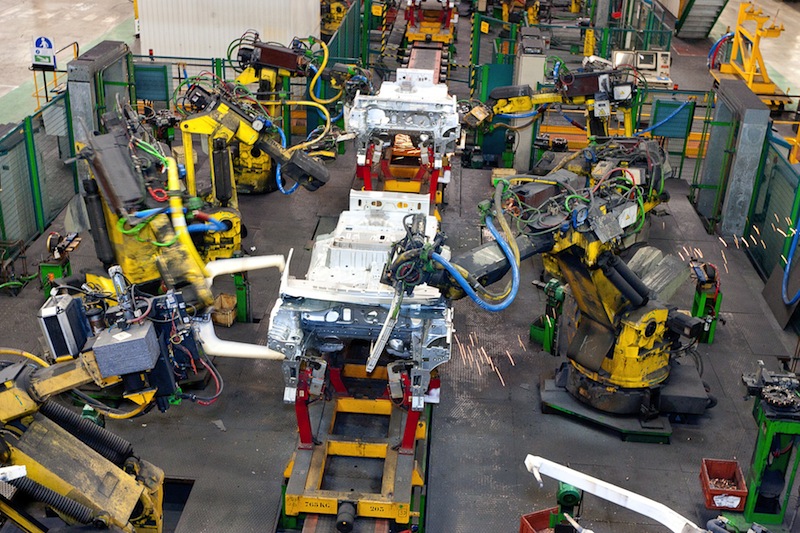 Founded back in 1999, the Renault-Nissan Alliance is the most enduring cross-shareholding partnership of the modern automotive era. The rather complex arrangement also involves Daimler; Renault and Nissan both hold a 50% stake in the Alliance’s legal entities, Renault has a 43.4% stake in Nissan, Nissan has 15% of Renault, while Daimler holds 3.1% in each of Renault and Nissan, thereby gaining indirect access to the benefits of the Alliance. Renault and Nissan each hold 1.55% of Daimler in turn. The Daimler arrangement has been in place since 2010. To complete the shareholding amongst vehicle companies, in 2012 Renault-Nissan together acquired a stake in AvtoVAZ and now control the Russian company via a 74.5% stake.

In the early days of the Alliance, the focus was on purchasing synergies, but the range of activities covered by the partnership has grown significantly since then to include numerous back-office functions, shared platforms and joint use of manufacturing facilities. The Alliance has a number of specific objectives, of which the following are determining factors in a large number of the actions by the two companies:

The Alliance intensified its co-operation in 2009, with the establishment of a dedicated team focused on identifying potential synergies. By 2012, the Alliance was claiming it had achieved nearly €2.7billion ($3.7 billion) of annual synergies, almost double the figure for 2009. Such synergies are only possible through combining almost all of Renault and Nissan’s purchasing operations; while the two brands have the option to, and indeed do, buy a proportion of their own parts, all of the purchasing activity undertaken by the Alliance involves joint purchasing.

Platform partners
The second major area of co-operation and synergy savings has centred on the use of shared platforms. For several years, Renault and Nissan have shared a common B-segment platform; this has formed the basis of the Renault Clio, Nissan Sylphy and Tiida, plus the Dacia Logan. In addition, a C-segment platform was used for the first-generation Nissan Qashqai and the current Renault Megane/Scenic/Fluence, while cross-badging arrangements have seen Nissan versions of Renault light commercial vehicles (LCVs) appearing on European roads. 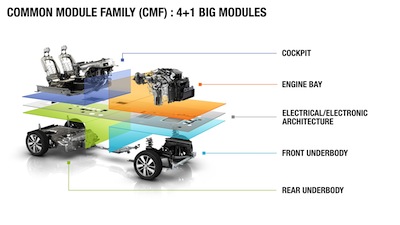 More recently, the Alliance has launched its Common Module Family (CMF) strategy, which has been designed so that different vehicles can be built from four basic components: the cockpit, the underbody front floor, the underbody floor for the centre and rear, and the engine compartment.

The Alliance has very ambitious plans for its CMF platforms, of which there will be three: CMF-A (for small entry vehicles, and largely developed in India), CMF-B (for the Clio/Micra segment) and CMF-C/D (for Megane/Scenic/Qashqai and bigger vehicles). The Alliance companies are not obliged to use the CMF approach for all new vehicles, and indeed the Datsun GO and its derivatives apparently do not use a CMF underpinning. By contrast, the new CMF-C/D platform is expected to provide the basis for as many as 3m vehicles a year and will include vehicles such as the Nissan Rogue and X-Trail SUVs and the next-generation Renault Laguna and Espace models, in addition to the vehicles mentioned above. CMF-B will also support as many as 3m vehicles a year. [sam_ad id=17 codes='true']

In addition to joint vehicle programmes, the Alliance has developed a series of common engines, the savings from which were said to have generated as much as €280m in 2011 alone, and more since that time. The K9K and R9M diesel engines are key sources of these savings and are used across more than a dozen Renault, Nissan, Dacia and Daimler vehicles.

Expanding the portfolio
In March this year, the Alliance announced the convergence of four key functions to achieve a further €4.3billion in annual savings by 2016: engineering, manufacturing and supply chain management, purchasing and human resources. This increased co-operation became effective from the beginning of April.

The Alliance is rapidly expanding its brand portfolio. Having added Dacia and Samsung in the recent past, as well as Lada/AvtoVAZ, the Datsun brand has also been revived. Datsun was the original export brand for Nissan, but this name was dropped in favour of Nissan on a progressive basis around the world, with Datsun disappearing entirely from 1981. The revived brand is taking the form of the Datsun GO and GO+, respectively a small hatchback and a mini-MPV specifically designed for emerging markets. The first vehicles will be made in India at the Alliance plant in Oragadam near Chennai, followed by production in Indonesia, Russia and a number of as yet unconfirmed production locations. Datsun has an initial sales target of 400,000 a year by 2017, across the three countries where production has been decided. The Alliance is targeting additional sales in South Africa, North Africa, Latin America and South-east Asia.

In parallel with the expansion in the number of brands in the Alliance portfolio, Renault and Nissan have decided to end cross-badging, or at least to reduce it significantly. While cross-badging will not be entirely eliminated (it is likely to continue in light commercial vehicles in Europe, for example), it will be considerably decreased in passenger vehicles. This process will start in India, where Renault and Nissan models have been sold under each other’s names in recent years.

However, we can expect to see many more cases of Alliance factories making clearly distinct models for more than one brand. This has been the case in India for some time, but not so far in Europe. Although there has been cross-badging in vans, which has led to Nissan versions of the Kangoo and Trafic vans, in Europe neither side of the Alliance has yet produced a passenger vehicle for the other brand; this will change in 2016 when Renault will make the Nissan Micra at Flins in France. Back in India, the next Nissan Terrano will be a distinct Nissan vehicle, rather than a badged version of the Dacia Duster, which is sold as a Renault in India.

Uniquely unified in Chennai
The Oragdam plant is unique as it is the only Alliance factory which currently supplies passenger vehicles for both companies. At present it makes five models under the Renault brand and five under the Nissan brand, as well as manufacturing a small number of minivans for Ashok Leyland for the local market. It has also just started making the Datsun GO.

Oragdam started production in 2010 and has two full production lines, plus a third line for CKD operations. Line 1 makes the Renault Duster and Scala and the Nissan Sunny, Evalia and Terrano, while Line 2 produces the Nissan Micra, Renault Pulse and Datsun GO. With the Renault Fluence and the Samsung-based Renault Koleos made on the CKD line, the factory produces vehicles off four platforms in eight different body styles. This plant is a fully integrated manufacturing operation, producing its own petrol and diesel engines and manual transmissions, as well as making most of the metal pressings it needs.

Other significant and symbolic arrangements under the Alliance’s umbrella include:

Working with Daimler & Mitsubishi
In addition to joint programmes between Renault and Nissan, the Alliance has two further co-operations with Mitsubishi and Daimler. The growing number of active projects with Daimler include:

Meanwhile, the Alliance announced a series of co-operation initiatives with Mitsubishi at the end of 2013, building on existing links between Nissan and Mitsubishi in Japan. The first action of the new partnership will be the development of an electric version of an existing Japanese market kei car for worldwide sale.

In addition, there will be two sedan models based on Renault-Nissan technology for the Mitsubishi brand. The first of these will be a D-segment vehicle to be made in Korea by Renault-Samsung at the Busan plant, for sale in North America. This will be followed by a C-segment model, with details of the production location yet to be confirmed.