After PSA and Opel, who's next? 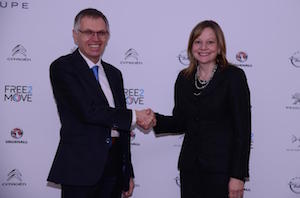 The acquisition of Opel/Vauxhall by PSA, which should be complete by the end of this year, took the industry by surprise. With Opel/Vauxhall still losing money in Q3 2016, GM’s chief financial officer, Chuck Stevens, said the company would do what was required to put the situation right. Most observers took this to mean that one or more plants would be closed, as previously seen at Bochum (Germany), Antwerp (Belgium) and Luton (UK).

Consequently, the idea of GM actually withdrawing from European vehicle manufacturing after some 90 years was a shock. The logic for GM was that it would solve a major financial headache and allow it to focus on North America and China especially, while for PSA the attractions are enhanced scale and the ability to share platforms and purchasing over a higher production volume. Many, including myself, remain sceptical that PSA will be able to solve the problems of Opel/Vauxhall which GM failed to tackle for close on two decades. Time will tell, but PSA is already making its mark, stopping development of the next Corsa on a GM platform and switching it to PSA’s new CMP architecture.

As the industry absorbed the news and assessed its implications, it was not long before discussion turned to what might be the next moves in terms of industry consolidation. Fiat boss Sergio Marchionne expressed his disappointment at not being able to merge with GM, but appears to hold out hope that Volkswagen will be interested in some form of relationship. However, VW has more pressing issues to deal with as it tries to overcome the deep-seated problems of the emissions scandal.

Last year, Nissan took a controlling 34% stake in troubled Japanese company Mitsubishi, reinforcing the scale and significance of the growing Renault-Nissan Alliance. Smaller Japanese players, especially Suzuki and Mazda, could be vulnerable to takeovers. However, the notoriously independent Suzuki would not succumb to VW’s wish to direct operations at the Japanese company and their cross-shareholding is being unwound. Nonetheless, Suzuki is establishing an alliance with Toyota, but whether this will amount to anything more substantial is another matter; Suzuki's management will take some time to be convinced that Toyota is the right partner.

Meanwhile in India, Tata is about to cooperate with Skoda on developing cars for this market, and potentially further afield. Furthermore, coming back to GM Europe, a commentator at Automotive News recently suggested that Tata’s British subsidiary, JLR, should buy the Vauxhall brand to reinforce its position in the UK. JLR has, one suspects, rather more global ambitions, but given the way in which the industry never ceases to surprise, such an idea should not be dismissed out of hand.

The other factor in the long-term consolidation of the industry is the role played by the Chinese OEMs. Geely has already acquired Volvo (which has grown strongly under its ownership) and, on a more modest scale, it has acquired and is growing the London Taxi Company. The other major Chinese involvement in the global automotive sector is the 15% stake held by Dongfeng in PSA. It would not be surprising if the next major move in consolidation among car companies involved another takeover by a Chinese player.