Ford’s 3FT may one day provide prototype variations without the need for dies and stamping, AMS reports

Stamping out sheet metal parts for production vehicles in a fullscale automotive manufacturing environment can be a matter of just a few seconds per part. Making the dies in which the parts are stamped is, in contrast, a heavy precision-machining task in which the lead-time involved can easily be a month or more. 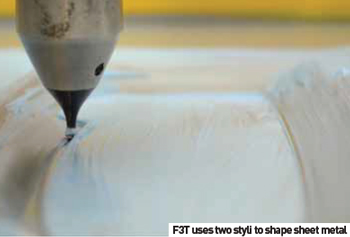 In the typical overall timescale of a vehicle development programme of several years, even that length of time can be factored quite easily into the run-up to the start of production once the design of the vehicle is finalised.

Further back in the process however, when prototypes are being made to undergo testing in the real world as opposed to in the virtual world of digital technology, waiting a month to receive a sheet metal component in a revised geometry or material formulation can be a real impediment to progress as well as a considerable cost.

But what if the need to cast and machine a die in which to form a new part could be entirely obviated? This potential may be offered thanks to a four-year development project at the Ford Research and Innovation Center at Dearborn, Michigan. Ford Freeform Fabrication Technology (F3T) has produced a prototype – so far only at quarter scale – of a system that is intended to make a sheet metal part within three days of the receipt of the relevant 3D CAD modelling data.

A new stylus of production

In hardware terms, the system essentially comprises two hexapod manipulators, each of which provides six degrees of freedom to a robotic arm at the end of which is a hard stylus. The manipulators, however, are not located side-by side but positioned inside a framework, which means that while one of them has its base towards the ground and its arm pointing vertically upwards, the other is inverted by 180 degrees and suspended above it with its arm pointing vertically downwards.

In use, a sheet of metal is clamped horizontally between the two manipulators and then formed into the desired shape through the action of the arms, which continually push the styli against both surfaces of the metal to alter its geometry.

So how did this innovative way of shaping metal come about? “We always look at new technologies,” says Jim deVries, manager, global materials and manufacturing research with Ford Research and Advanced Engineering.

F3T was developed from an idea that first came to the centre’s attention as the result of work carried out at a number of universities in the US and elsewhere.

According to DeVries, the use of styli to shape sheet metal is not unprecedented, but previous implementations of the technique have involved only a single stylus acting on just one face of the metal – an approach which still requires the manufacture of a ‘single-face’ die to support the reverse face of the material in order to achieve dimensional accuracy. The F3T system’s pioneering ‘double-sided’ approach is what makes it so potentially disruptive of established procedures.

“That is where our intellectual property lies,” says DeVries. Given that F3T is currently a research project, the Ford team are unwilling to reveal too much about how the system actually works. In itself, the hardware is not unusual and the initial 3D design data used by the test rig is in the industry standard Catia software format. One of DeVries’ colleagues, technical expert Vij Kiridena, indicates that the really innovative aspect of the set-up is to be found in the software that first analyses and simulates the process, then controls the actions of the robotic arms.

The company is more forthcoming in describing how the system might offer future vehicle development teams a rapid prototyping capability for sheet metal parts that could equal in speed the similar capability that already exists for, say, plastic parts using techniques such as 3D printing. In another respect it may exceed those techniques as it could fabricate multiple parts in exactly the same material that an intended production vehicle would use, rather than as an approximation.

At the moment no such capability exists. At one extreme dies are made in which to press parts, while at the other a skilled worker can produce one-off parts manually using a rather old-fashioned piece of equipment known as an ‘English wheel’. While the first could provide virtually unlimited numbers of accurate parts it would be expensive and time-consuming. The second, though cheaper and faster, is limited in throughput and subject to the variations inherent in any manual process. 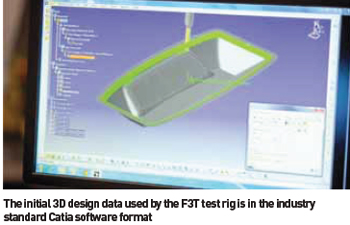 In practice, says Kiridena, the prospect with F3T is that from receipt of the design data, the programming of a fullscale rig to make a part would take about a day. The fabrication process for a single part – given that only a tiny proportion of the surface of the metal could be processed at one time – would probably take another 24 hours; hence the team at Dearborn do not regard the process as suitable for production vehicles, but as a means for vehicle development and testing engineers to be able to iterate design variations of real sheet metal parts on a 72-hour timescale.

A likely scenario would involve the production of parts in batches of maybe 12 to 20 in a continuous run but attaining that objective requires more than just speed. Kiridena points out that dimensional accuracy, quality of surface finish and maintenance of required material properties must all be satisfied. Without those conditions being fulfilled then any panels the technique might make would be purely cosmetic.

The research team, however, are confident that they are well on the way to achieving their goals. “There have been no surprises so far,” states DeVries.

As it currently exists the system is still an experimental rig in need of further development before its promise as a prototyping tool for real vehicle development programmes can be properly tested, but that is precisely what Ford is now setting out to achieve. With the aid of just over $7m of US Government funding provided as part of a wider initiative to promote energy-efficient manufacturing, the company will be leading a consortium including aircraft manufacturer Boeing, Northwestern University, the Massachusetts Institute of Technology and Penn State Erie to construct a fullscale prototype for further testing next year.

According to Feng Ren, another technical expert who has worked on the project, that will involve increasing the size of the sheets the system can handle from 600mm x 600mm to 2,000mm x 1,500mm. The current achievable 100mm depth of draw will also be increased correspondingly. In addition, the complexity of operation will be augmented with eight degrees of freedom for the manipulators being targeted.

Somewhere a few years ahead, therefore, an innovative and potentially very useful tool for enhancing the automotive development process and hence the quality and safety of new generations of vehicles, may become a reality.