A taste for two wheels 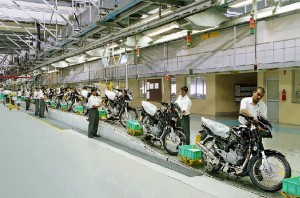 The world’s largest motorcycle market still has room for expansion

The numbers involved in the world’s largest two-wheeler market are truly astonishing. Last financial year, 15m motorcycles, scooters and mopeds were sold in India, up from 8m in 2008/9. Back in 1971, the figure was just 100,000.

The incredible size and growth of this market, dwarfing car sales, reflects the fact that motorcycles are a way of life in India. In rural areas they provide reliable and affordable transport for the poor, while in urban areas they are useful to all social classes for travelling through the congested streets. Indeed, growth in the premium bike sector over 200cc indicates an expanding lifestyle demand.

Motorcycle manufacturing in India has benefited from the same liberalisation as the passenger car industry. As a result, joint ventures between local companies and foreign OEMs, established in the 1980s, have unravelled. Honda was the last to break free when it split from Hero in 2011; Yamaha and Suzuki both went solo in 2001. Now all three Japanese OEMs build and sell in India, competing strongly with the two largest manufacturers, Hero MotoCorp and Bajaj.

The main players in India
Hero claims it is not merely the largest motorcycle-maker within India but in the world, based on annual sales. Building out of three plants near the northern centre of motorcycle production, New Delhi, Hero has the capacity to make 6.9m units per year (increasing to 8.8m on the completion of two new factories) and has the sales to match, which last financial year exceeded 6m.

Based on these figures, Hero has a market share of 46% in its main motorcycle business. Hero’s budget Splendor 100cc machine, costing from around $700 excluding showroom taxes, took 23% of the market on its own in the 2012 financial year. Hero is profitable, too. According to the company’s financial report, operating margins stood at 9% in 2012/13.

However, that does not compare to Bajaj, which has operating margins of 19%. Three Bajaj factories – one 200km east of Delhi, another in Maharastra and one near Pune – have a total capacity of 5.4m. The company sold 3.8m two-wheelers in the 2012/13 financial year, with domestic sales of 2.5m.

Previously second place in the market, Bajaj has recently been overtaken by a resurgent Honda, which in the last financial year grew 31% to sell 2.7m powered two-wheelers in India. Superiority in the scooter market is Honda’s big strength. However, a newly introduced rival to Hero’s budget Splendor motorcycle, badged Dream, plus a big push in rural areas have seen sales climb where rivals’ have stalled.

The company opened a third factory near Bangalore earlier this year with a capacity of 1.8m. The manufacturer has said that by the end of 2014 it will have the capacity to build 4.6m motorcycles in India.

A temporary brake on growth
Like carmakers, two-wheeler manufacturers have had to endure a period of stagnation after years of double-digit growth. Last financial year to the end of March, sales were up just 2.3%, and sales of motorcycles themselves were flat at 12m. The smaller moped market was similarly static at 800,000. Only scooters were on the rise, with sales up 12% to just over 3m.

This year has proven little better, with motorcycle sales under 350cc (the majority) up just 3.5% to the end of October, according to figures from the Society of Indian Automobile Manufacturers (SIAM). “The two-wheeler industry witnessed one of its worst performances in a decade,” Hero chairman Brijmohan Munjal wrote in the company report in April. He blamed high inflation, rising petrol prices and steep interest rates for the drop-off in growth.

In his own financial report, Bajaj chairman Rahul Bajaj was pessimistic about the prospect of an upturn. “Despite being an optimist, I do not yet see signs of substantial recovery in the near future. The decline in the growth may have bottomed out; but incremental growth will be modest,” he stated.

The slump has put a brake on growth plans for some. In October this year, Yamaha told business newspaper Mint that it would postpone the inauguration of its planned Chennai plant by a year because of the poor economy. The company will continue with its two factories near Delhi.

Investing in greater capacity
Yet with India’s population at 1.2 billion, no-one believes growth will stay slow for long. Munjal at Hero suggested in his report that increased spending ahead of next year’s elections will put money back into the pockets of the consumer, and that demand should pick up outside urban areas. “It is the medium to long-term future playing out in the Indian countryside that I am really excited about,” he said.

Along with Hero, Suzuki is another motorcycle manufacturer which is increasing capacity. The Japanese OEM currently has a 4% market share courtesy of its plant near Delhi, which has a capacity of 500,000. However, it told the Business Standard in October that it aims to expand capacity by 20-30%. The newspaper reported that Suzuki is planning a second plant, also near Delhi.

Meanwhile, the growth of scooters has helped Italian OEM Piaggo to establish itself in the Indian market after starting production at its facility near Pune in April last year. The factory makes the 125cc LX, a version of the European scooter of the same name, specifically for the Indian market (priced at the equivalent of $1,260). Piaggio said last year that it expects sales of scooters and three-wheelers to account for 50% of its revenues in Asia by 2014, compared with 25% in 2009 and just 8% in 2003.

This marks a comeback for Piaggio, which first licensed its scooters to Bajaj in the 1960s and then went into partnership with LML in the 1980s. The LML link is long broken, but the Indian company still makes copies of Piaggio’s original design, exporting it to countries like the UK. 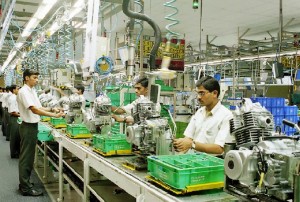 Piaggio also kick-started the Indian three-wheeler rickshaw revolution after licensing its Ape to Bajaj in the 1960s. Now Piaggio makes its own three-wheelers in India and the company said that in the first nine months of this year it was the market leader, with a 34% share. It is a substantial market, too. In the last financial year, 839,742 three-wheelers were built in India.

At the same time, the growth of the premium sector is helping retro motorcycle maker, in Chennai, to grow at an impressive rate. The company has reported that sales have grown by 52% to 113,432. The formerly British brand has been rejuvenated under the ownership of commercial vehicle specialist Eicher Motors and this year opened a second plant in Chennai.

Exporting & expanding abroad
The increased profitability of the domestic motorcycle manufacturers has given them the confidence to look outside India for further growth. Exports already account for sales of 1.8m in the 2012/13 financial year, although these were largely attributable to Bajaj. Hero exports to emerging markets in Central America and Africa, as well as operating assembly sites in Sri Lanka and Kenya.

More recent plans go beyond exports to include tie-ups with foreign OEMs. Earlier this year, Hero bought a 49% stake in former Harley Davidson-owned sports motorcycle manufacturer Erik Buell Racing (EBR) of the US. It was announced in October that EBR will distribute Hero motorcycles in North America from summer 2014.

It has also been reported that EBR will help Hero to develop new motorcycles, along with Austrian engine specialist AVL and Italy’s design house Engines Engineering. According to the Indian media, this could involve an ultra low-cost motorcycle equivalent to the Tata Nano.

Meanwhile, in 2012 Bajaj took a 47% stake in Austrian performance off-road motorcycle-maker KTM. The two have already developed strong links, with Bajaj building the KTM Duke 200 for the Indian market and the KTM Duke 390 for export at its Chakan plant near Pune. The Duke 200’s single-cylinder engine also goes into a 200c Bajaj sports motorcycle called the Pulsar 200 NS.

Royal Enfield owner Eicher Motors has also made connections abroad, announcing in its annual report for 2012/13 a 50:50 partnership with Indian and Victory motorcycle owners Polaris Industries in the US to set up a greenfield project in the automotive sector. According to local media reports, this will be a four-wheeler project making use of an old Royal Enfield factory in Rajasthan, but it might also include motorcycles.

Motorcycle makers based in India currently enjoy an export advantage arising from their low cost-base and flexible capacity, but the demands of their mighty and still-growing home market are likely to provide plenty of business for many years to come.