A surge in suppliers

A combination of shrewd government taxation policies and the need to keep a tight lid on costs has resulted in very high levels of local content in the vehicles built in South East Asia, up to 90% in some cases. That has spawned almost an entire supply chain contained within the borders of Thailand, and to a lesser extent Indonesia and Malaysia.

The extent of Thailand’s components industry was revealed to the world in the catastrophic floods of 2011, resulting in the government a year later almost bragging in a report on the industry that the impact “stressed Thailand’s position as a top motor vehicle production base” partly because “motor vehicle production in many countries around the world were also affected due to shortage of parts supply”. The 2012 report, dubbed the Thailand Industry Master Plan 2012-2016, pointed out that by 2011, 58 companies in the top 100 list of global suppliers were building within the country.

In the same year, a report by analysts IHS Automotive put the total number of Tier 1 auto suppliers in Thailand at 709, with 1,100 Tier 2 and 3 companies. For Malaysia, that figure was 280 Tier 1 and 200 Tier 2 and 3, while in Indonesia it stood at 166 Tier 1 and 336 Tier 2 and 3. It is Indonesia, however, that will see the most impressive growth, according to IHS. “I expect only Indonesia to grow for parts companies. It’s the most promising production market for parts,” says Jessada Thongpak, IHS’s senior analyst for the region.

Reflecting Japan’s dominance in local vehicle sales, the majority of part makers in this part of South East Asia are Japanese, up to 80% in Thailand according to Thongak. Research quoted in the Thai government’s Master Plan said that between 2006-2010 Thailand was the largest recipient of Japanese foreign direct investment in the automotive industry in the ASEAN (Association of Southeast Asian Nations) regions, ahead of Indonesia, the Philippines and Vietnam and Malaysia. In the vast Rayong investment park near Thailand’s south east coastline, where the majority of the auto industry is located, 25 of the 179 auto-associated manufacturers are owned by Toyota alone.

But with around 2.5 million new vehicles to supply, Thailand’s parts business is a global affair, helped by the presence of European and US-based OEMs. For example, among the European Tier 1 suppliers in Thailand, ZF Lemförder began production at a new plant in Rayong to supply axle systems to BMW, Mercedes, GM and Ford. The company had been in Thailand for nine years, but a new contract with Ford allowed it to expand to its new 7000 sq.m plant without relying on the big Japanese makers nearby.

Local content
Key to the suppliers’ success in this region are the high local content rates. The Thai government noted in its 2012 report that the local parts used in the dominant light pickup industry averaged 80% of the total, with passenger cars managing 45% and motorcycles 90%. Thailand is working hard to improve that passenger car number, most recently via the second phase of its ‘eco-car’ programme, which attracts manufacturers with low excise and import duties, but also makes them promise that eventually 90% of the cars built will be made with local content.

A similar situation is arising in Indonesia, which built 1.2 million vehicles last year. Its version of Thailand’s eco-car programme commits those manufacturers signing up to source 80% of parts locally within five years. Honda has already pledged that its new Brio Satya 1.2-litre A-segment car will achieve 85% local content, while its new Mobilio MPV will reach 86%. When its second plant comes online in 2014, also based to the east of Jakarta, the company says it will have increased the number of agreements with local suppliers from 100 to 145.

Taking advantage of this increased focus on local supply is Bosch, which announced that it will be opening its first factory in Indonesia later this year to supply a number of as yet unnamed Japanese OEMs. The factory, with its staff of 120, will be making oxygen sensors and injectors for engines, according to a Jakarta Post story.

In total, Indonesia’s localisation plan has resulted in investment of $3.5 billion in the country from around 80 parts makers, an industry ministry official told Bloomberg in December last year.

Plans to expand
Business is booming, Japanese-affiliated businesses working in the auto industry around Asia told the annual survey for the Japan External Trade Organization (JETRO). Of those businesses in Indonesia, 74% said they would be expanding in 2014, more than the 65% figure for Japanese companies in Thailand. In China for example, the figure was 63%. Thailand is still the better place to make money, respondents claimed, with 88% predicting profits there for 2013 in the year-end survey, compared to 63% in Indonesia.

The boom is having an understandable impact on wages. The JETRO survey last year put the average workers’ wage at $324 a month in Indonesia, with Thailand at $366 and Malaysia the most expensive of the three at $429. By contrast India was at $217 a month while China reached $375. In the SE Asian countries, Indonesian wages were rising fastest, with Japanese auto-focused companies in that country reporting a 28% hike in 2013-2014, following a 19% increase between 2012-2013.

But of all industries reporting in, those connected with auto manufacturing said wages accounted for the least of their outgoings at just over 13%. The greatest proportion of money spent was on materials and production.

Skills shortage
However, Thongpak at IHS notes that Thailand in particular is experiencing a labour shortfall. “High skilled workers are in short supply,” he says. He doesn’t believe that will affect Tier 1 suppliers as they become increasingly automated, while more labour-intensive Tier 2 and 3 suppliers are less in need of highly skilled workers. “I don’t think it will limit growth in a short-term scenario,” he states. The problem will come when Thailand pushes forward its programme to get more parts companies to build in the country, and not merely assemble. For that to happen, more of the technology R&D must happen in the country. As the 2012-2016 Master Plan states: “Without infrastructures for research and development such as automotive testing and research centres, technology development will not take place.”

Stamping was by far the most competitive parts industry based on sales per employee, according to the IHS 2012 report, with a figure of almost $150,000. Indonesia was stronger in machining than Thailand or Malaysia, while the three were evenly matched on plastics. Rubber was another of Thailand’s strengths, reflected in the fact that the country’s tyre manufacturing output is massive, accounting for 24% of all automotive part exports in 2011, according to government figures. 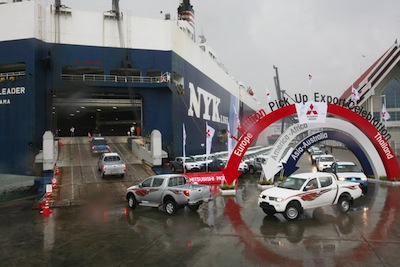 Parts exports in total are huge for the country, earning it $12 billion in 2011, up from $3 billion in 2007, again according to government figures. IHS wrote in its 2012 report that Thai parts exports were greater than its imports and totalled more than the parts exports of all the other ASEAN countries put together. According to the Association of Indonesian Automotive Manufacturers, Indonesia exported 12,339,714 auto components in 2013.

One driver in expanding the parts businesses in Thailand and Indonesia particularly was the fact that the Yen in Japan, the mother country for many parts companies, has been very strong in the past few years, making outsourcing abroad an attractive choice. However, the Yen has fallen from over 0.4 for one Thai baht in 2012 to 0.32 currently, which could mean that Japanese parts suppliers slow their expansion in SE Asia.

There is the potential for a lot more local sourcing to come from the Japanese auto suppliers and OEMs – those in Thailand asked by JETRO for the survey published in December 2013 said that 31% of parts and materials were still arriving from Japan. In Indonesia it was still higher, with 43% from Japan. Asked what materials and supplies they were, the most common answers were steel material, ceramic parts, electric parts, resin material and rubber. Asked why, the top reason at 86% was “they cannot be produced in areas other than Japan in terms of quality/technology”.

As with other countries with expanding parts industries, the goal is to entice suppliers manufacturing at a greater level of complexity and therefore cost to complement the simpler, more labour intensive industries like tyre making. Thailand is closer to needing that than the still booming Indonesia, but if both can train the workforce needed while keeping costs competitive then the two will continue their phenomenal growth.