A slow return to growth

Brazil is by far the biggest market in South America and a decade ago the country had been drawing in investment far and wide from manufacturers looking to tap into growth that saw vehicle sales top 3.8m in 2012. Then came the crash, and in 2016 the market slumped all the way back to 2.05m. Last year growth returned. It was nothing spectacular, but vehicle sales rose 9.2% to 2.24m (of which 1.86m were cars). However, production rose 25% to 2.7m on the back of a boom in exports, according to figures from the local manufacturers’ association Anfavea.

This year the sales growth has been more impressive. Totals were up 20% in the first four months, with April growing a whopping 38% – the biggest surge this decade, according to sales tracker Bestsellingcarsblog.com. 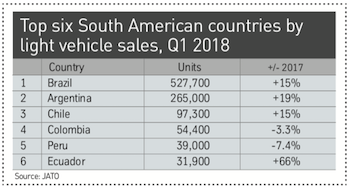 The main players are sounding more optimistic again. Fiat Chrysler Automobiles, which last year lost its long-standing number-one position to General Motors after its share slumped, believes the market will grow 10% this year to 2.4m. In the long term, FCA believes Brazil will expand to 3m by 2022 and is confident the company will once again be making a 10-12% profit margin in the wider Latin America region, executives told investors at an event on June 1 this year. In 2017, Brazil was FCA’s third biggest revenue earner after North America and Italy.

Meanwhile, GM’s leapfrog into the lead helped it turn around a loss in South America and make a profit in 2017, according to company figures, helped by a 14% increase in sales for Chevrolet across the region. In Brazil last year, GM had an 18% share thanks in part to the Chevrolet Onix. Built at its plant in Gravataí, Rio Grande do Sul, the Onix remains Brazil’s best-selling car by far, beating the Hyundai HB20 and Ford Ka into second and third places respectively in the first four months of this year. 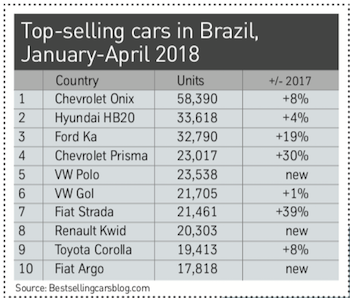 Revenue from cars sold in 2016 fell to $41.3 billion, down more than half from a peak of $87.3 billion that was reached back in 2013. Investment by auto parts-makers also fell from $2.4 billion in 2011 to just $452m in 2016, with several car makers putting their developments on hold. For example, in 2016, Honda spent $1 billion constructing new plant in Itirapina – a municipality in the state of São Paulo. It has capacity to build 120,000 cars, but the plant was idled on completion.

Now, however, there are signs of life again as companies cautiously plan for growth. Honda announced in April that it will pull the sheets off the production lines at Itirapina next year to start building cars there, beginning with the Fit B-segment hatchback. But the announcement came with caution, as the OEM revealed that it would stop car production at its Sumare plant, also in São Paolo state, and migrate models over to Itirapina. The Sumare plant will switch to engines and other components. In an interview with Globo newspaper, Honda Latin America chief Issao Mizoguchi said the growth wasn’t strong enough to support two factories.

Meanwhile Daimler has opened a new production line for Mercedes-branded light- and heavy-duty trucks at its plant in São Bernardo do Campo in São Paulo state. The plant is the company’s largest for commercial vehicles outside Germany and the new line is 15% more efficient thanks to increased automation and supply chain improvements. It also opened a new proving ground for Mercedes commercial vehicles in Iracemapolis, São Paulo state. In fact, 46% of all Brazilian-made vehicles were manufactured in São Paulo state last year, and it is home to 27 automotive plants, including for Ford, GM, Honda, Hyundai, Daimler, Scania, Toyota and Volkswagen.

VW spent €660m ($767m) modernising its Anchieta plant, just south of São Paulo, for the production of the Virtus and the new Polo hatchback. In April came news that it would start producing its first SUV in Brazil, the small T-Cross, at its São Jose dos Pinhais plant in Curitiba, Parana state. The T-Cross goes on sale in the first half of 2018 to rival Renault’s Kwid, which was localised at its plant, also in Curitiba, and successfully launched in July last year.

Meanwhile, on the parts side, Spanish pressed metal specialist Gestamp opened its seventh plant in Brazil last year, in Betim, Minas Gerais state, to serve FCA by supplying parts for the Fiat Palio and Siena. The company said the €24.9m plant would employ 82 people by the end of 2017.

Gestamp president Francisco Riberas was bullish about the country last year in an interview with AMS, stating that Gestamp’s strategy was to keep its nerve in the downturn. “Some of the competitors are now finished. We kept what we have and we have taken the most important orders for the future. What we need now is for the market to recover,” he said, adding that he was confident that would happen. “To get to 3.5m [a year] is logical for a nation of 200m. It’s just a matter of reducing interest rates,” claimed Riberas.

However, Brazil won’t hit the highs of 2012 in the medium or even long-term future, analyst firm LMC Auto predicts. It backs FCA boss Sergio Marchionne’s view that the market will hit 2.4m this year, before making a gradual climb to 2.7m in 2020 and 2.9 million by 2023. By 2030 it predicts a total of 3.5m, but that’s it. “We don’t see Brazil reaching the peak from 2012 again,” Augusto Amorim, senior manager, Americas vehicle sales forecasts, tells AMS.

There are good reasons for this prediction. One is that 2012’s peak was fueled by debt. “Back in 2012, there were tax incentives for several industries. Consumers bought cars, but also appliances and furniture. Debt skyrocketed,” Amorim says. “The government is still trying to adjust its fiscal deficit, so we don’t expect it to offer more incentives to the auto industry.”

Another reason could be that those who bought cars in 2012 are keeping them. “A 2012 used model isn’t that old and can offer more features than a new, entry-level car,” Amorim says. Brazil is a price-sensitive market and the already high prices are getting higher. In Brazil an average of 30% of the purchase price is tax, compared to 17% for the UK and 6.8% in the US, according to figures from Anfavea. In 2014, tougher legislation killed some of the older, cheaper vehicles.

The premium market is in the doldrums. Last year it stood at around 45,000, down from 60,000 at its peak. That wouldn’t be such a problem if the government’s Inovar Auto policy, designed to encourage local manufacturing, hadn’t persuaded Europe’s premium automakers to set up plants in Brazil. But they did and those with expensive localised manufacturing are feeling the pain. That includes Jaguar Land Rover, which in 2014 started construction at Itatiaia, Rio de Janeiro state, at a cost of 750m reais, aiming for an annual capacity of 24,000. Production started in 2016 with the Land Rover Discovery Sport and Range Rover Evoque SUVs, but last year the firm sold just 7,759 vehicles in Brazil, of which fewer than 5,000 came from the Itatiaia plant.

Audi reduced its investment by building cars at VW’s Curitiba plant, and recently installed a new line in the bodyshop there for its A3 sedan and Q3 SUV production, despite disappointing sales. 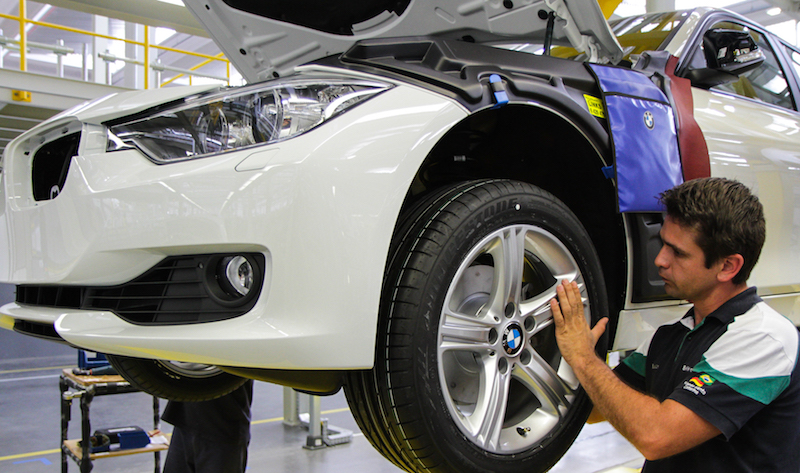 Like other premium carmakers in Brazil, BMW is struggling, with its factory in Araquari operating at just 50% capacity

However, BMW is feeling similar pain to JLR. In 2014, the German marque built a factory in Araquari, Santa Catarina state. According to Helder Boavida, president and CEO of BMW Group Brazil, it is now operating at just 50% capacity, and the carmaker’s sales in Brazil fell last year to 11,758. The plant was built in response to Inovar Auto, which penalised imports with high taxes, but now BMW is frustrated by the lack of a follow-up industrial policy after Inovar Auto ended last year and wasn’t renewed, largely because Brazil lost a dispute at the World Trade Organisation over high import duties and other discrepancies that breached its membership rules. “We need clear policy to have predictability to define our future plans,” Boavida recently told Bloomberg.

Inovar Auto’s replacement, Rota 2030, is meant to offer incentives based on the vehicles’ energy efficiency rather than local production, but has been delayed. “Rumour has it that the lack of incentives is one of the main issues delaying the announcement of Rota 2030 – companies want incentives, the government refuses to give them,” LMC’s Amorim said. 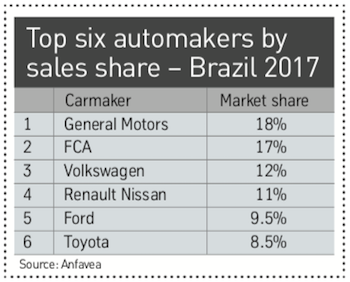 The production jump last year was partially due to a 46% increase in exports to 784,718, giving hope that they could grow to beat 2005’s record of almost 900,000. Exports had slumped in the downturn but not with the same force as local sales, and manufacturers can now be hopeful of another path to reducing excess capacity. The president of Anfavea, Antonio Megale, in his introduction to its 2017 review, credited the government’s new trade agreements, citing as an example the one concluded with Colombia in December. He also said that Brazil’s safer, more high-tech vehicles were a better fit with more advanced markets.

Sales to local markets are increasing. In Chile, for example, a country with no automotive industry of its own, the market share of cars imported from Brazil jumped from 1.2% in 2014 to 8.8% in 2017, Megale said. Exports to Argentina stood at 534,970, with Brazil by far the largest source of vehicles for its neighbour in 2017 at 83% of all its imports. Argentina’s sales figure for all vehicles in 884,000 was up 23% on the year before. To give some indication of size, that was above Thailand and below Turkey.

Brazil’s import figure eclipsed Argentina’s production figure of 473,408, of which 139,967 were exported the other way to Brazil. Vehicle production in the country flatlined in 2017 compared to 2016, and both numbers were a long way off the record of 828,771 in 2011. Investment is maturing, however. This year Mercedes X-class pickups began rolling off the Renault production lines in Cordoba, while Groupe PSA is in the middle of modernising its plant in El Palomar for the production of new vehicles in 2019. Late last year, meanwhile, VW announced investments of about €560m to optimise processes at its plant in Pacheco, as well as prepare the facility for production of a new SUV, which is due to start rolling off the lines in 2020.