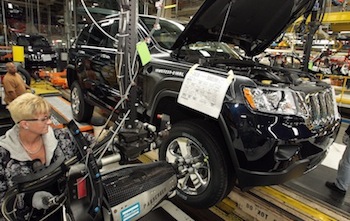 Even before they officially tied the knot in January, Fiat and Chrysler had been planning a shared production future, in countries where it makes sense to do so. Jeeps made in Italy and China, Fiats built in Mexico, Chryslers which use Fiat-based architectures – all of these either already exist or soon will.

Chrysler’s previous owners and partners have bequeathed it various vehicle architectures, some of which, such as the Mercedes-Benz W164, sit comfortably under big-profit models such as the US-made Jeep Grand Cherokee. But there are others which, while not exactly state of the art – the aged Mitsubishi PS/PA platform is one – work well enough for now serving as the basis for the Mexico-made Dodge Journey and Fiat Fremont.

The Dodge Avenger, another model which uses PS/PA, will soon be discontinued, while its former twin, the Chrysler 200 sedan, has just been succeeded by an identically named model. This is manufactured at Sterling Heights Assembly Plant (SHAP) in Michigan and is one of the first Chrysler models to use the Fiat CUSW architecture.

CUSW is a highly adaptable set of modules and, as its name suggests, is mainly for C-segment vehicles; not only sedans in the case of the 200 and its close relative, the Fiat Viaggio, but also a hatchback in the form of the Fiat Ottimo which goes down the same line at GAC-Fiat’s Changsha plant in China, with a wagon to come. The new front-wheel drive/all-wheel drive Jeep Cherokee is another CUSW model, but unlike the Chrysler 200 this one is manufactured at Toledo North in Ohio. A Chinese version, the Jeep Zi You Guang, is expected to enter production at Changsha alongside the related CUSW platform Fiats.

Major plant investments in Italy
FCA will announce more details about its future merged activities in April, but it’s possible to see already which platforms and vehicles should be discontinued or have their replacements subsumed within existing projects. Alfa Romeo is the obvious example, as its current model range is small, yet Fiat continues to state that future production volumes will be far greater than 2013’s sub-100,000 level. That will mean major investments in several Italian plants, as well as the creation of a new rear and all-wheel drive architecture. Obviously, Alfa is too minor a brand to justify a new platform, so the next big Chrysler and Dodge sedans and coupes to be built at Brampton in Canada should share this RWD/AWD matrix. 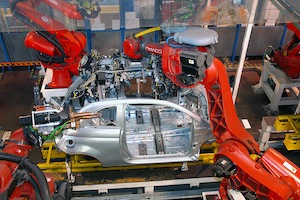 One production location in obvious need of new products and a major investment is Cassino. This facility in central Italy currently builds three cars which are close to the end of their lifecycles. The Lancia Delta and Fiat Bravo will likely be phased out during the second half of 2014 or 2015 at the latest, while the equally slow-selling Alfa Giulietta might also be axed next year. What fate awaits Cassino? One scenario has this as the location for Europe’s Fiat Bravo replacement (Project 317). This would probably be closely based on China’s new Ottimo five-door and upcoming Ottimo SW (estate).

Mirafiori, close to Fiat’s Turin base, is soon to begin building a big new SUV, the Maserati Levante. This is an especially interesting new model, being based on the Jeep Grand Cherokee but reportedly much changed – and there will be a Ferrari V8 option, according to Sergio Marchionne. A higher output version of the VM Motori 3.0-litre V6 found in the existing European markets’ Grand Cherokee should also feature. A big SUV for the Alfa Romeo brand should then enter production alongside the Levante from 2016 or 2017.

Melfi, another of Fiat’s Italian plants, has no such questions surrounding its future output. Here, major spending has been underway to prepare for the introduction of two new models, each of which should start rolling off a new line later in 2014. An investment of €1 billion has been made at Melfi for the production of the Fiat 500X and a sister model for Jeep, co-developed under the B-SUV project code. Production of the Jeep Scamp (or possibly Laredo) will come first, to be followed by the 500X from the fourth quarter of this year. Up to 1,600 vehicles a day for Europe and North America will be made via three shifts.

The Nissan Juke and Ford EcoSport rivals from Fiat and Jeep will use SUSW, an architecture which was developed from SCCS. In simple terms, that means the current Fiat Punto and Opel/Vauxhall Corsa’s platform. Fiat’s engineers first developed SUSW for the 500L and its derivatives, the compact MPVs which are made on the same line at the former Zastava factory in Serbia. Kragujevac built nearly 150,000 vehicles in 2013.

With Ford choosing to go its own way for Europe’s next Ka (India seems the most likely build location), Fiat will no longer be contracted to make this A-segment model alongside the related 500 at Tychy. The Polish plant is also set to lose the Panda at the end of the current car’s lifecycle in 2018, with the next generation to be built in Italy.

Tychy has reportedly been awarded the contract to build the next-generation Cinquecento. This car, due in 2015, will again be a three-door hatchback, but it should be joined by project 316, a five-door model which would effectively step in for the by then discontinued Punto (currently made at Melfi). It is believed that the Punto model name will be replaced by 500-something, possibly 500SW.

Increased platform integration in the Americas
The larger 500L is exported from Serbia to North America and does well in the US. So might it also be made in the Americas? It could well be. Fiat might have stopped building the Idea in Italy, but this small MPV is still manufactured in Brazil and should continue through to 2015. It seems logical that the 500L would then take its place at Betim, as Fiat begins the overdue process of switching this giant complex over to the production of more modern vehicles and architectures. 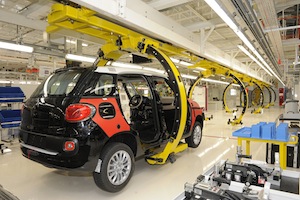 Chrysler might not be a major player in Brazil, but with Fiat’s help, the Jeep brand might at least begin to find firmer footing in this still-growing market. It is already well known that the current Patriot and Compass SUVs will be replaced by one model. The C-SUV project was originally going to mean Jeep and Alfa Romeo 4x4s being built at Mirafiori in Turin but Fiat then changed its mind, blaming the volatile US dollar/euro exchange rate. Now, both will be built either in the US or Mexico, and there might well be a Jeep pick-up too. C-SUV project vehicles will all use CUSW.

The ability to scale CUSW up or down is one of the key advantages of basing various key group models on it. Replacements for today’s Dodge Journey and Fiat Freemont crossover MPVs had originally been expected this year but plans changed and they should now use CUSW, entering production in 2016. In contrast to today’s models, they seem unlikely to be made at Toluca in Mexico, with suppliers reporting Michigan’s SHAP as the build location (project codes: JD and JG).

Fiat’s forthcoming greenfield plant at Goiana in Brazil is highly likely to make a variant of C-SUV’s Jeep (project code: 546) and a future Fiat SUV (XSU) as well as a Fiat Pick-up (226) for the local market. The first of these is due to leave the line at Goiana in December 2015. The new plant might also make the Jeep and Fiat 500X B-SUV models from 2016. Meanwhile, an executive at Fiat India stated last year that a small SUV would be built in the country "by 2015", as well as a small Jeep SUV. These would be for the domestic market, plus export. The situation in India is complicated by the fact that Fiat operates under a joint venture with Tata Motors, though it does not share platforms with its rival.

While there are many plans to share architectures, plants, powertrains and R&D operations at a global level, evolving all of this into one new organisation will mean long hours for FCA managers for years to come. Big investments for sites in Italy, the US, Brazil and elsewhere are set to continue as the Fiat-Chrysler integration progresses.